Director Michael Parks was thanked for his service today at the Brazoria County Municipal Utility District No. 26 Board meeting. 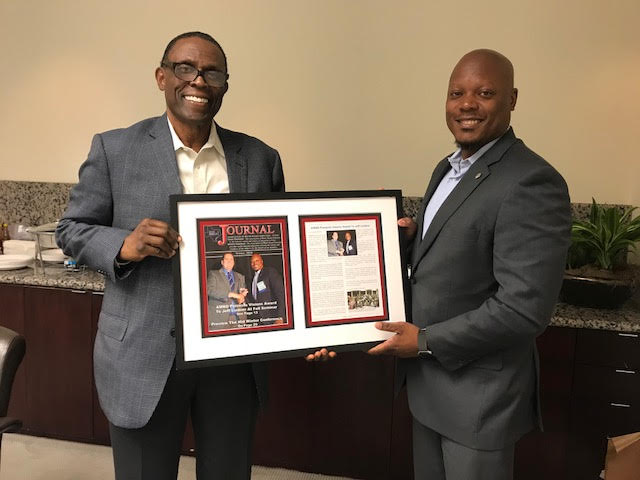 WHEREAS, Brazoria County Municipal Utility District No. 26 (the “District”) has been legally created and operates pursuant to the general laws of the State of Texas applicable to conservation and reclamation districts; and

WHEREAS, Michael L. Parks served as a Director on the Board of Directors from 2007 through 2017; and

WHEREAS, Michael L. Parks has been instrumental in making difficult decisions regarding all District matters; and

WHEREAS, Michael L. Parks has been instrumental to the MUD community by serving as the President of the Association of Water Board Directors; providing significant leadership to
the MUD community, including representing the District at the City and State level; and

WHEREAS, Michael L. Parks, on numerous occasions, performed work above and beyond the call of duty, while exhibiting loyalty, dedication, and professionalism.

NOW THEREFORE, BE IT RESOLVED BY THE BOARD OF DIRECTORS OF BRAZORIA COUNTY MUNICIPAL UTILITY DISTRICT NO. 26 THAT:

Section 1. Michael L. Parks’ presence at all future Board of Directors meetings will be missed and noted.

Section 2. The Board hereby finds that Michael L. Parks has made invaluable contributions and has been a superb Director for the District and his outstanding performance
in maintaining and operating District Facilities is hereby commended.

Section 3. The Board hereby wishes Michael L. Parks every happiness and extends its best wishes for all his future endeavors, which will no doubt result in great success.

Within a community, especially one as busy and expanding as the City of Pearland, there are several governmental entities that a resident can turn to for assistance for ease of everyday living. What are these entities? What do they do? What makes one different from another? Below, we explain the difference in responsibilities between these three entities: MUD 26, the City of Pearland, and Shadow Creek Ranch Homowners Association (HOA).

MUD 26 consists of several board members who regularly meet to discuss the financing, building, and execution of certain projects or initiatives to better the community of Shadow Creek Ranch. The reason that the MUD was created was to bring basic services to residents who may not otherwise have had these services readily available In addition, the MUD provides additional security patrols and handles matters related to building parks or recreational facilities that contribute to the betterment of the community.

Once the MUD had successfully handled the financing of the water, sewer, and drainage infrastructure within the city, these facilities were built. Once they were built, they were transferred to the City of Pearland for maintenance. After financing was secured and the facilities were constructed, the City of Pearland became responsible for the provision of water and sewer services to all residents within the city.

Additional responsibilities that belong to the City of Pearland include the installation and maintenance of traffic signal systems, as well as the following:

● Animal services, such as pet adoption, licensing, microchipping, and fostering
● Emergency medical services and management, which ensure that the city’s response to an emergency or disaster is effective
● Municipal court duties to provide the administration of justice, with court case resolution
● Disposal services, including provision of waste management solutions to reduce waste and other specialized services

The primary responsibility of the Shadow Creek Ranch HOA is to maintain the property and any common areas used by the residents of the community. This is funded by a set monthly/annual fee. Some of the maintenance responsibilities include collecting bids from contractors, arranging for inspections, and responding to emergencies. The structure and communications within the HOA involve holding meetings for members, electing and maintaining a board of directors, and communicating any decisions to homeowners, property managers, and other personnel. The HOA operates as its own independent entity, separate from the city or the MUD, in that it sets and approves its own rules, appoints its own committees, and delegates responsibilities accordingly, as well as independently reviewing complaints from residents that fall within their jurisdiction to resolve and make decisions regarding such matters.

As outlined in this brief review above, each entity (MUD 26, the City of Pearland, and the Shadow Creek Ranch Homeowners Association) has its own significant set of responsibilities that ultimately work together to ensure the highest level of safety and comfort for all residents within the community.

MUD 26 works hard year-round to support the services and needs of all residents. But what makes MUD 26 unique? How do residents of this MUD benefit, in particular, in comparison to other area entities? Here are a few things that make MUD 26 different.

– Bond rating: The MUD’s bond rating is exceptional, compared to other MUDs, as rated by national agencies. This accomplishment was achieved by the resourcefulness of the MUD. All decisions made by MUD 26 have placed the highest priority on residents and their needs; and to allow for minimal financial stress, via taxes, on the community, MUD 26 has proactively been paying off the bonds. These efforts have contributed to its stellar rating. Another significant financial benefit is that MUD 26’s status allows bonds to be sold at a lower interest rate, thereby decreasing the cost of the overall infrastructure. With the overall principal and interest payments on these bonds being at a lower rate, there is a decreased financial burden on the community for the essential services that the MUD provides.

– Homestead exemption: Another goal of MUD 26 is to protect the value of the properties within the district and the interests of homeowners. For this reason, the district found it appropriate and extremely beneficial to offer a general 20 percent homestead exemption to all residents within the district. In addition to the economic gains it affords the community as a whole, homesteading a property proves advantageous in several circumstances, including that (1) it protects the principal value of a property from property taxes, and (2) if a spouse dies, the surviving spouse is protected. Not only do a number of districts not offer the option of a homestead exemption, but the ones offered are not often as significant as 20 percent. The MUD is confident that this option will be an asset to the community and to all current and aspiring homeowners within the district.

– Location inside of a city: With the number of small and locally owned businesses on the rise in the City of Pearland, the residents of MUD 26 are in a prime location within the city. Because Pearland is such a high-traffic city, there is no shortage of diversity in the population, and residents, as well as visitors passing through, contribute to the economic well-being of the community. The increased growth of small businesses allows for additional job creation, and the ongoing support of commercial businesses (including daycare facilities, a Kroger grocery store, a Hilton Garden Inn, retail shopping centers, restaurants, etc.) further supports the ideally situated location of MUD 26.

The MUD will continue to review all initiatives in a way that allows for the highest comfort level, to ensure that residing in this community remains a pleasant experience.

For persons with questions or needing help regarding website accessibility, or to request the provided information in alternative formats, please call (713) 860-6400.